The Heritage Centre has received the support of the Heritage Lottery Fund for a project examining Smethwick during the Blitz in WW2, particularly the key year of 1940 when 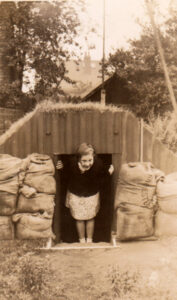 Britain and her then Empire stood alone against the aggressors.

There will also be a book and displays as part of the project. We are seeking memories from those who remember the Home Front and the Anderson Shelters in Smethwick. Additionally we are interested in exploring the legacy of those shelters in the post war years to the current day. What were they used for in this era and how many are left in situ?

Anderson commissioned an engineer named William Patterson to design a small, affordable shelter that could be erected in people’s gardens. Between then and the outbreak of the war in September 1939, around 1.5 million shelters were distributed to people living in areas expected to be bombed by the Luftwaffe. During the war a further 2.1 million were erected.

Anderson shelters were issued free to all householders who earned less than £250 a year, and those with higher incomes were charged £7.  The shelter was made from six curved sheets bolted together at the top, with steel plates at either end and could accommodate four adults and two children. The shelters were half buried in the ground with earth heaped on top.

Shelters were issued free of charge to all householders later in the war. Before that, householders who had been issued with free shelters (and who didn’t have big families) sometimes allowed their slightly better off neighbours to share them.

Anderson shelters were effective only if half buried in the ground and covered in a thick layer of earth. They were generally cold, dark and damp. In low-lying areas they were prone to flooding, and sleeping was difficult as the shelters did not keep out the sound of the bombings. Bunk beds could be made or you could buy them from stores.  The toilet, as such, was a bucket in the corner.

People were often reluctant to use them because of the conditions. When using them you were recommended to take important documents with you, such as birth and marriage certificates and Post Office Savings books. These were often kept in one place, to grab quickly, as there was little time to waste from when the air raid sirens sounded their warning. 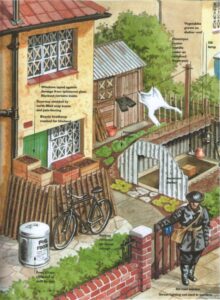